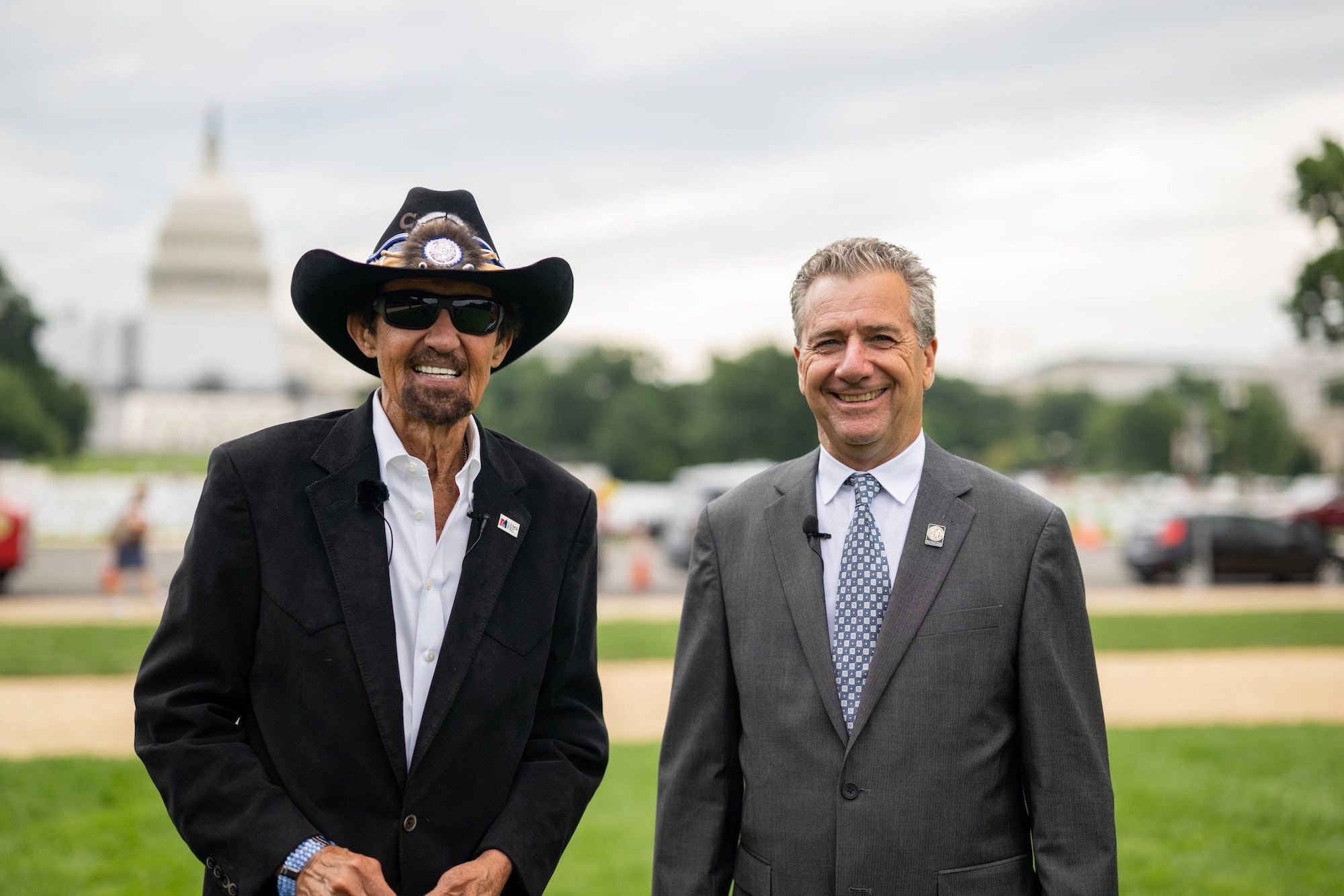 Advocating for the motorsports community, former stock-car-racing driver Richard “The King” Petty (left) and SEMA CEO Mike Spagnola arrive in Washington, D.C., as part of an industry delegation pushing the immediate passage of the Recognizing the Protection of Motorsports (RPM) Act.

On Tuesday, July 19, Richard Petty, "The King," joined SEMA CEO Mike Spagnola in the nation's capital to lobby Congress to pass the Recognizing the Protection of Motorsports (RPM) Act. The bipartisan bill (H.R. 3281/S. 2736) protects Americans' right to convert street vehicles into dedicated racecars and the motorsports-parts industry's ability to sell products that enable racers to compete. The Washington, D.C., visit came at a critical juncture for the bill, which has been steadily gaining traction among lawmakers.

Like most NASCAR drivers, Petty competed in racecars that started out as street-legal vehicles. The Environmental Protection Agency (EPA) maintains the position that such modified race vehicles are not legal under the Clean Air Act, threatening many classes of racing along with an industry that employs tens of thousands of Americans and contributes more than $2 billion to the U.S. economy each year.

Petty, Spagnola and other industry advocates sat down with key members of the U.S. Senate and House of Representatives to speak for the interests of racers, enthusiasts, builders, tracks, sanctioning organizations and businesses, while also looking to gain stronger congressional support to protect one of America's oldest pastimes and hobbies: motor vehicle racing. In an effort to curtail the EPA's overreach and extreme enforcement of the Clean Air Act, Petty and Spagnola emphasized the urgent need to pass the RPM Act, which awaits committee action in both chambers of Congress.

The RPM Act reverses the EPA's interpretation that the Clean Air Act does not allow a motor vehicle designed for street use—including a car, truck or motorcycle—to be converted into a dedicated racecar. This American tradition was unquestioned until 2015 when the EPA took the position that converted vehicles must remain emissions-compliant, even though they are no longer driven on public streets or highways.

"The EPA is overstepping its jurisdiction and penalizing small motorsports parts businesses," said Petty. "The RPM Act is essential to the racing industry and protecting the careers of young racers all over the country. During most of my racing career, my fellow NASCAR drivers and I competed in racecars that started out at as street-legal vehicles."

"The RPM Act will save the livelihood of thousands of Americans, including many young racecar drivers," said Spagnola. "SEMA is dedicated to ensuring our industry remains viable. Racers and the businesses that make motorsports possible deserve clarity in federal law that protects the ability to convert street vehicles into dedicated racecars and sell products for these track vehicles without fear of enforcement."

Both Petty and Spagnola were optimistic about their meetings with key RPM Act supporters in Congress. "Motorsports has many strong allies in Congress. It was valuable for Mike and me to sit down with these lawmakers to discuss how we can work together to pass the RPM Act this year," shared Petty.

Clearly, Petty made a huge impression on those he met with. "Walking the halls of the capitol with Richard Petty was an unforgettable experience," said Dan Ingber, SEMA/PRI vice president of government and legal affairs, who also joined Petty on the Hill. "Even the most stoic lawmakers couldn't hide their excitement to meet The King, as House and Senate members approached him in the halls for pictures, a quick conversation, and one congressman even had Mr. Petty sign a diecast No. 43 car. One lawmaker who is typically very serious, reminisced about a 1972 NASCAR race in the presence of his idol."

The SEMA and Performance Racing Industry (PRI) -backed RPM Act was introduced in the House of Representatives by U.S. Representatives Patrick McHenry (R-NC) and Raul Ruiz (D-CA) in May 2021. Although simple and straightforward, like many pieces of legislation, its route to passage has been anything but. While conceding that its forward pace can at times seem glacial, SEMA/PRI Director of Congressional Affairs Eric Snyder believes momentum for the RPM Act is now reaching the tipping point.

"We are  engaging in high-level conversations with some of the most important policymakers on Capitol Hill about the RPM Act. The meetings and dialogue we are having is very encouraging, but we must continue to apply grassroots pressure on the principal decision makers. We don't want to wait until the next Congress. It has to happen now."

Snyder added that more than a million-and-a-half people who support racing, and earn their livelihoods from it in many cases, have spoken loud and clear for the legislation. "For a whole lot of lawmakers, the RPM Act is one of the top issues that they're hearing about. They're familiar with the bill and are noticing the uptick in enthusiasm for the RPM Act, thanks to all of the outreach from SEMA, PRI, the racing community and fans. We are focused on leveraging this enthusiasm and excitement into Congressional action."

At press time, 129 House members from both parties are cosponsoring the RPM Act. Including Senate supporters, over 160 members of Congress are publicly supporting the bill. Not surprisingly, many of them represent states or districts that have a strong race presence that includes tracks, racers, and racing-equipment makers.

"Indiana and North Carolina are synonymous with motorsports and have really strong representation on the bill," he explained. "The U.S. Senators from both states are RPM Act sponsors, along with a number of their House members. Some people might not think California is the lifeblood of racing, but it's home to over 60 racetracks! Wherever there's racing, chances are you'll find lawmakers who are supportive of the bill. California leads the way with 15 members of the state's congressional delegation serving as RPM Act co-sponsors."

Which is why letters, emails, and calls, in addition to reinforcing the RPM Act via social media, still count for a great deal in the ongoing legislative process. With that boost, Snyder is cautiously optimistic that the bill will finally become federal law. "If they put this bill up, we have the votes to pass it through committee, both in the House and the Senate. It would easily pass in the House and Senate," he predicted.

Indeed, Snyder believes the industry is playing an extremely strong hand. The bill has been circulating for a few years now, and SEMA and PRI have redoubled their efforts to propel it over any remaining hurdles. The formula for success in Washington, he said, is to build a critical mass of engaged voters that can't be ignored—something the industry is now accomplishing.

"Lawmakers know the RPM Act and the passion behind it," he explained. "They also very aware that we're not going away. Combine that with the fact that there aren't any strong detractors who are strongly opposed to the bill. Ultimately, this is about education and persistence to ensure that lawmakers understand that the racing community is well organized and expects them to pass the RPM Act in 2022."

With the 2022 mid-term election only weeks away, now is the time to put the pedal to the metal and remind your members of Congress that you want the Recognizing the Protection of Motorsports Act (RPM Act, H.R. 3281 and S. 2736) passed now.

The act enjoys strong bipartisan support in the 2021-'22 session of Congress, but SEMA members and the racing community must turn up the pressure to pass the bill this Fall. Even if you've already encouraged your lawmakers to support the legislation, now is the time to reassert its importance.

Here are things you can do today:

For more information about the RPM Act, visit www.saveourracecars.com. 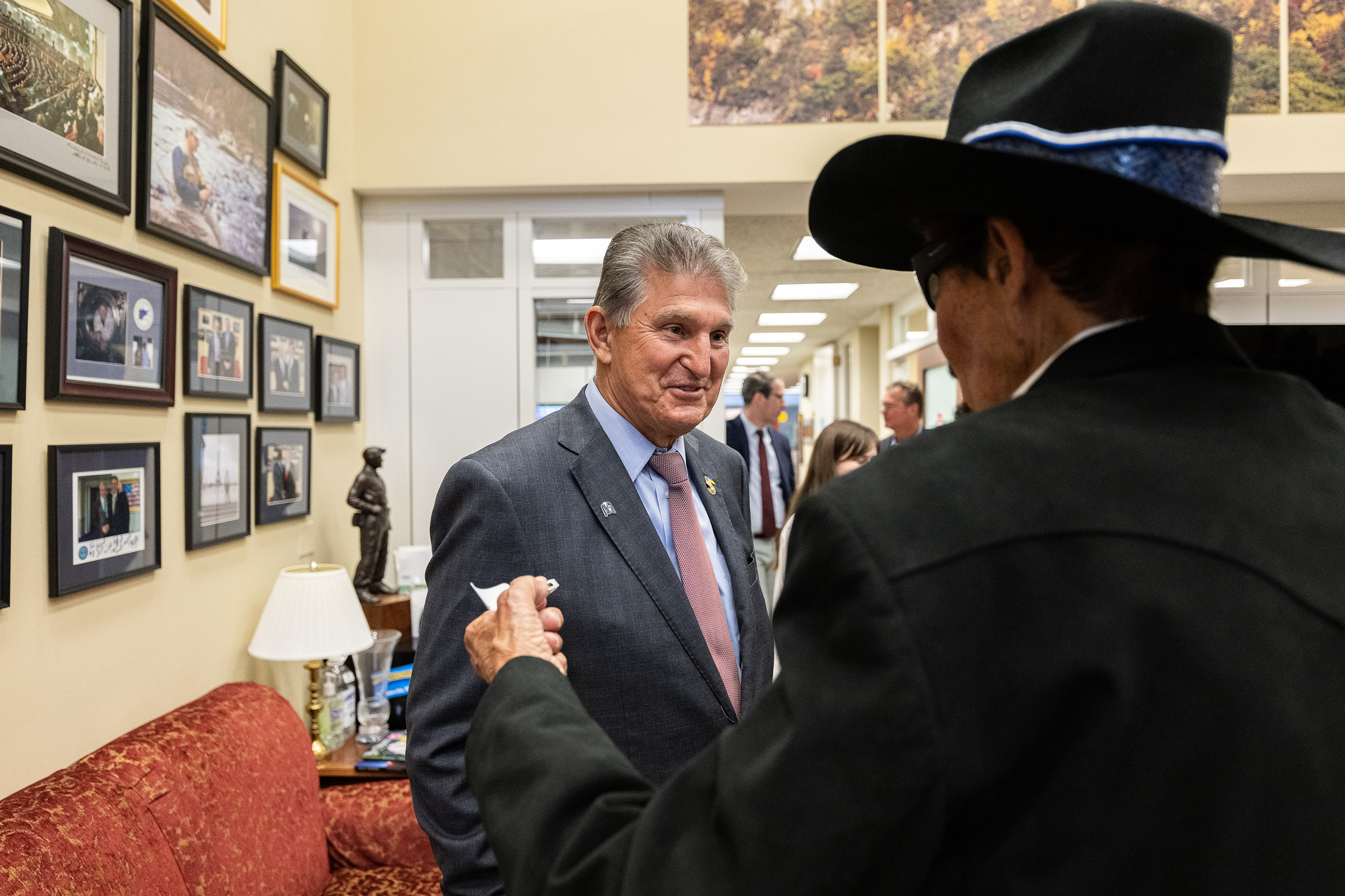 Making his Capitol Hill rounds, Petty met with many key lawmakers on both sides of the political aisle, including Senator Joseph Manchin of West Virginia. The King found many receptive ears. 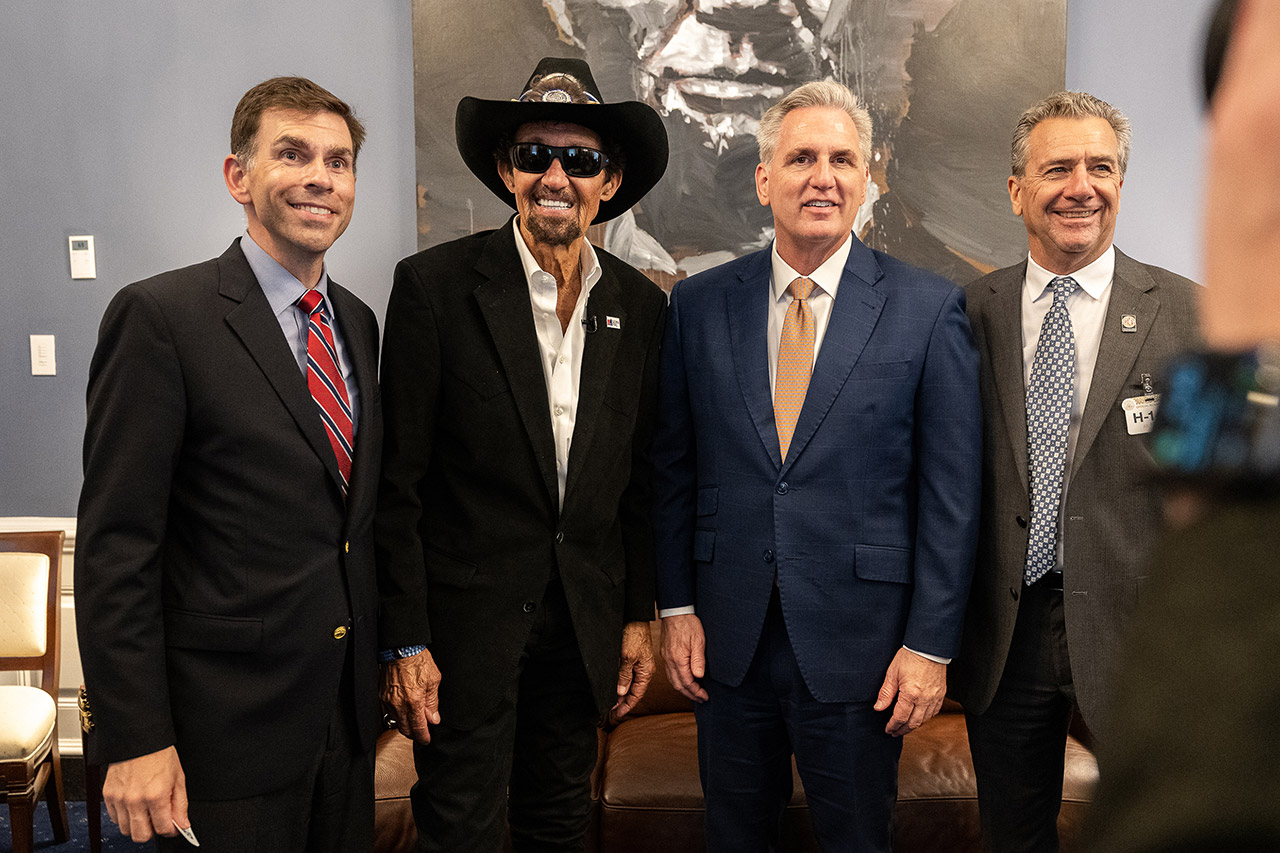 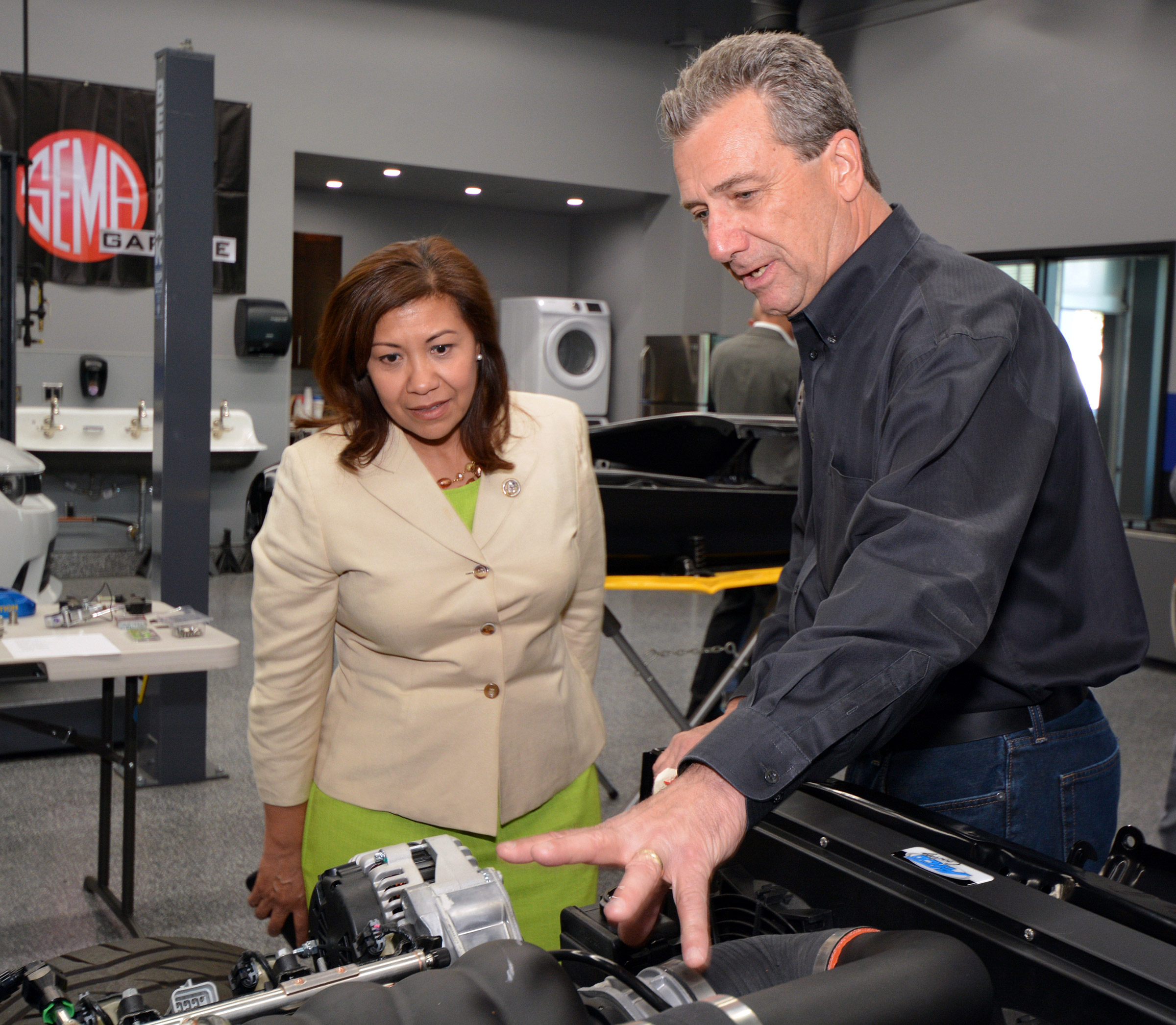 U.S. Representative Norma Torres (D-CA) shares SEMA’s passion for classic vehicles, as she enjoys driving a ’66 Ford Mustang that her husband Louis restored (he’s currently fixing up a classic Ford truck). As shown above, Rep. Torres visited the SEMA Garage in Diamond Bar, California, for a tour provided by SEMA CEO Mike Spagnola (right). She recently gave a keynote address to SEMA members in Washington, DC, during a reception and dinner at the Waldorf Astoria following a full day of meetings on Capitol Hill. Earlier this year, Rep. Torres was instrumental in encouraging officials to finalize the long-awaited, SEMA-led federal turn-key replica car law. She is also amongst the 133 House co-sponsors of the RPM Act.