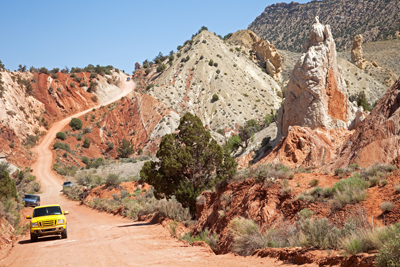 The Wilderness Act of 1964 established a framework whereby Congress protects land that is essentially undisturbed, retains a primeval character, is without permanent improvements and generally appears to have been only affected primarily by the forces of nature. The lands become part of the "National Wilderness Preservation System" which began with 9 million acres and now encompasses nearly 110 million acres. Many of the wilderness areas are in national parks, while most of the other lands are within national forests or fish/wildlife preserves. "Wilderness" is closed to all motorized vehicles and mechanical forms of transportation, including mountain bikes.

"Wilderness Study Areas" (WSAs) are lands that have been designated as having wilderness characteristics, potentially making them eligible for the "wilderness" status. Federal agencies manage the lands so as to protect these characteristics until Congress ultimately decides their final status. There is no timeline for making a decision and legislation must be enacted to finalize the process.

Current law provides the president with authority to declare land of "historic or scientific interest" to be a national monument. Although not as onerous as a wilderness designation, motorized recreation and other activities may be subject to limitations within the monument. While this authority has only been used 137 times in 100 years, vast amounts of land have been set aside in the process. In 1996, President Clinton set aside 1.9 million acres of land in Southern Utah as the Grand Staircase-Escalante National Monument. President Obama is now under pressure to establish a 1.4 million-acre "Greater Canyonlands National Monument," closing 1,050 miles of off-road vehicle trails and monitoring another 1,450 miles for future closure.

The Endangered Species Act of 1973 (ESA) was designed to protect threatened and endangered species, and the habitats in which they are found. It applies to federal, state and private lands. The U.S. Fish and Wildlife Service (FWS) maintains a list of more than 2,000 threatened or endangered species, which includes birds, insects, fish, reptiles, mammals, crustaceans, flowers, grasses, and trees. Given its successes and failings over the past four decades, there have been widespread calls to revise the ESA to foster more cooperative efforts and incentive programs between the government, private landowners and conservation organizations. The law has favored a blanket approach of setting aside millions of acres rather than nurturing smaller recovery zones. During this time, the OHV community has been unnecessarily deprived of access to roads and trails but the sacrifice has not necessarily meant that a particular species is better protected.

Following recommendations made by SEMA and other organizations, the U.S. Forest Service (USFS) created revised regulations for off-highway vehicle (OHV) use in national forests and grasslands. The need for reasonable travel management stems from the fact that off-road activity has risen from 5 million riders in 1972 to 36 million in 2000. Under the policy, the USFS is required to formally designate a system of roads, trails and areas where motorized vehicle use would be allowed. Local agency officials are required to seek public comments from state and local officials and other stakeholders in determining routes open to OHV use. The rule provides for increased involvement from the OHV community in the designation process. As recommended by SEMA, USFS considers "user-created" routes in the review process. Many of these routes came into existence during "open" management and serve a legitimate need and purpose, and do not pose an environmental threat. The USFS is also updating its official maps since many existing roads and trails do not appear in the official inventory. Each individual forest or ranger district is pursuing route designations. Many have been completed while some are still being developed and subject to public comment. 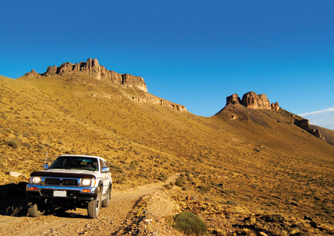 In 2001, the U.S. Bureau of Land Management (BLM) issued a "National Management Strategy for Motorized OHV Use" which recognizes motorized recreational as a legitimate use of public land. Under the program, public lands are designated as "open," "limited," or "closed" to OHV use. Open areas are areas where all types of vehicle use are permitted at all times, anywhere in the area. Limited areas are lands where OHV use is restricted at certain times or use is only authorized on designated routes, and closed areas are lands where OHV use is prohibited. In 2005, the BLM revised its "Land Use Planning Handbook" to incorporate specific guidance for "Comprehensive Travel and Transportation Management." In 2007, the BLM sent guidance to its field offices to further clarify travel management decisions in the planning process. It noted that continued designation of large areas as open to unregulated "cross-country travel" was not a practical management strategy (although still permitted), and that field offices should direct OHV travel to designated roads and trails. For the 258 million acres of BLM administered lands, the BLM's current OHV designation status is approximately 32% "open," 4% "closed," 48% "limited," and 16% "undesignated". Included among the "open" areas, BLM manages approximately 100 specifically designated OHV riding areas. The BLM estimates that it hosts over 55 million recreation visitors on its lands every year, an increase of over 80% since 1990. The agency estimates that 22 million of these visitors participate in motorized recreation.

Additional information is available at:

The National Park Service (NPS) manages nearly 400 units covering about 85 million acres of land. The parks enjoy nearly 300 million recreational visits each year, including a variety of OHV activity. Less NPS land is open to OHV activity than for lands managed by the BLM or USFS. The NPS has four categories of lands - national recreation areas, national seashores, national lakeshores and national preserves. The NPS generally requires a special rulemaking, with environmental impact analysis and public comment, to designate OHV routes and activity areas within the park units. Under its 2006 management policies, OHV activity is permitted when determined to be an appropriate recreation that will have no adverse impact on the area's "natural, cultural, scenic and esthetic values." Examples of site-specific disagreements regarding appropriate off-road activity include OHVs in North Carolina's Cape Hatteras National Seashore, ATVs in Florida's Big Cypress National Preserve, and snowmobiles in Yellowstone National Park. The NPS continues to evaluate OHV use in a number of park units and issue park-specific regulations. Many such regulations have already been completed. Some have sparked lawsuits and triggered efforts to resolve the matter via Congressional legislation. Lawmakers also have authority to conduct oversight hearings and provide guidance to the NPS officials regarding Congressional intent.

Forest Service Planning Rule: In 2012, the USFS issued its latest regulations governing how the agency prepares individual Forest Plans for each forest and grassland. The so-called "Planning Rule" is the master guidance document for developing, amending and revising land use plans. For example, it governs broad issues such as multiple-use, preferred use, and the implications of global warming. The USFS and the public have struggled to define the meaning of words and phrases used in the planning directives. The Planning Rule has been issued several times in recent years. It has been the subject of lawsuits and been overturned by the courts. The current Rule has been challenged. Meanwhile, the USFS has established an advisory task force to provide guidance on its implementation. 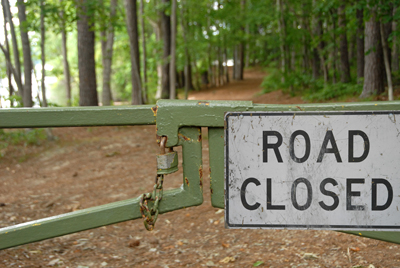 In 2001, the U.S. Forest Service issued a rule to stop construction of roads in 58.5 million acres of potential wilderness lands under its control. The so-called Roadless Rule affects about 30% of the total Forest Service land base, namely the inventoried roadless areas. Forest Service roads provide access for the timber and mining industries that may eventually become recreational roads.

The Roadless Rule was the subject of nearly endless challenges and litigation until 2013. The rule was modified to permit local forest managers more input on access issues and to provide state governors with an opportunity to request exemptions from the rule. Conflicting opinions worked there way through the appeals courts until the Supreme Court eventually ratified the 2001 rule. At issue for the OHV community is the ability of state government and local communities to help shape forest management decisions.

Additionally, many current USFS maps do not include routes well known to users and state/local officials. The USFS is still in the process of inventorying the routes and update maps, so it would not be appropriate to unilaterally close the lands under the guise that they are "roadless."

In 2003, the Interior Department initiated a policy to make it easier for states and counties to claim rights of way on thousands of dirt roads that run across federal lands, most of which were created between 1866 and 1976 when federal mining laws encouraged western settlement. The subject mining law is called "Revised Statute 2477(RS 2477). At issue is whether state and local governments, and the OHV community, will pursue huge numbers of public right-of-way claims to these old trails that can be maintained as dirt-bike trails or OHV roads, or even converted into paved roads. One important element of this issue is that where roads are protected, areas will be ineligible for designation as wilderness. The State of Utah has been most active in pursuing RS 2477 right-of-way claims. The claims are now subject to a number of lawsuits.