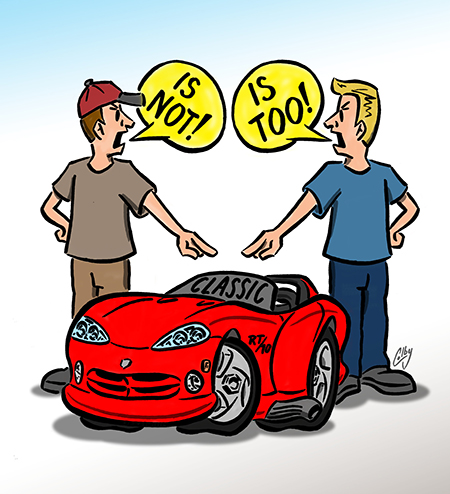 When it comes to older vehicles, the adage “one person’s trash is another person’s treasure” certainly applies. The variety of tastes within the automotive hobby ensures that just about any car or truck is desired by someone. In addition, the value attached to each four-wheeled specimen changes over time. However, because a car may be rare doesn’t always mean that it is valuable. Many other factors, including current condition, prior refurbishment, pedigree, special options, limited packages and more must be considered as well.

After more than 100 years of automotive innovation, identifying factors that have earned certain vehicles “classic” status is increasingly relevant. A leading authority in the collector car community, the Antique Automobile Club of America, allows all vehicles 25 years old or older to be officially judged at national meets. In many states, vehicles that are 25 years old and older are eligible to receive a variety of benefits and accommodations. At the federal level, the Cash for Clunkers Program spared cars 25 years old and older from the scrappage heap and expanded parts recycling opportunities. Long-time readers will remember the SEMA Action Network’s (SAN’s) role in securing that amendment to the law.

Earlier this year, the Maryland and Nevada legislatures introduced legislation attempting to redefine which rides qualify for specialty registrations. Under the Maryland bill, the age requirement for vehicles eligible for registration as “historic motor vehicles” would have been raised from 20 to at least 30 years old. The law currently provides these vehicles certain benefits, including an historic license plate, reduced registration fees, and exemptions from equipment and emissions inspections. In Nevada, under pending legislation, only vehicles manufactured prior to ’96 would be eligible for “classic vehicle” registration, denying future classics the opportunity to ever achieve this registration status. Currently, vehicles 25 years old and older are eligible. A separate bill to repeal the emissions test exemption for all classic vehicles, classic rods, street rods and old timers is also on the table. Under that bill, all vehicles manufactured before ’96 would instead be exempted, meaning that all ’96 and newer vehicles would be emissions tested for life.

These measures, and others like them, are the result of specialty registrations being granted to vehicle owners that “abuse” the privilege. You know what they are—daily drivers, commercial trucks and otherwise poorly maintained autos wearing a specialty tag. Supporters argue that these efforts attempt to restore the designation’s inherent value. Most laws limit use of these cars and trucks to participation in car club activities, exhibitions, tours, parades and occasional pleasure driving. Many abusers commonly seek refuge in these designations after failing the required emissions test, diluting these categories with cars that the law was not intended to protect.

On the flip side, opponents believe that these proposals are not favorable to enthusiasts and make it more difficult to register legitimate historic vehicles. Over the past several legislative sessions, Marylanders have fought to retain the historic vehicle definition against restrictions that are based on unsubstantiated claims of abuse. The Maryland Motor Vehicle Administration is already authorized by regulation to suspend the registration of any historic vehicle for use that violates the law. The state also seems focused on collecting additional registration revenues at the expense of collector-car owners. Further, the population of these vehicles is still not enough to cause any significant smog issue in either state. It has been shown that classic vehicles currently constitute less than 1.6 % of the total vehicle population in Nevada!

The SAN has chosen to oppose these bills in order to safeguard the greater good. SAN member Ramzi Vincent boiled down the issue in a letter to Maryland lawmakers: “Why penalize the many for the crimes of the few?” As an organization, we have always recognized the fact that the automotive community as a whole forms a diverse constituency. We believe that nobody’s taste in cars and trucks should be compromised by legislation to the extent possible. The hobby will be best served by demonstrating that we share common goals and that we can work together to ensure that these designations will be available to younger enthusiasts entering the hobby in the years to come.

Only time will tell the outcome of these battles. Fortunately, Maryland’s bill died when the legislature adjourned for the year. However, the fate of Nevada’s proposals is still undecided at the time the Driving Force went to print. Be on the lookout for an update and let’s hope with our combined efforts, it brings good news for those affected car collectors!