The automotive community's ability to enjoy vehicles of all kinds is impacted continuously by laws and regulations. Accordingly, the SEMA Action Network (SAN) has influenced state and federal proposals affecting enthusiasts nationwide since 1997. Over the past 20 years, long battles have been waged over "Cash for Clunker" initiatives, unfair exhaust-noise restrictions, excessive taxes, titling and registration problems, backyard builds, racing and a slew of other issues. In fact, bills threatening the hobby in multiple states were killed by SAN forces—some in less than 24 hours. The following details the SAN's successes across the country on its platinum anniversary.

David started a four-wheel-drive (4WD) club, the Eastern 4 Wheelers, in 1987. "We quickly found the importance of dealing with the legislature and joined EC4WDA, U4WDA, Tread Lightly, ORBA and SEMA," he recalls. "Through the SEMA Action Network (SAN) and the other national 4WD organizations, I learned how to speak the lawmakers' lingo and write letters, make calls, attend hearings, etc. Attending meetings of trade-based groups has underscored the importance of such organizations to enthusiasts and the industry alike. If it's illegal to modify our cars and trucks or use them on our public lands, many of the businesses that we buy from, small and large, would simply be eliminated. We're in the fight together."

In time, Brill's focus shifted from trucks and 4WD vehicles to classic cars. An old Jaguar XJ6 led to his current show car: the '88 Jaguar that appears in the photo above. He and his wife and joined the Jaguar Club of Southern New England (JCSNE) with the idea that he would merely enjoy the club as a casual member. "My inner self wouldn't allow me to sit idly by—within two years I was asked to take on the position of club president, a position I still hold some eight years later. In the same time, I started a small business finding old cars and assisting the owners in selling their classic/specialty vehicles, called AutoArcheologist.com."

JCSNE was easily convinced by David to join the Connecticut Council of Car Clubs (4C's), a legislative organization of nearly 70 Connecticut car clubs. No stranger to advocacy work, the group's combined efforts have been able to keep a number of recent threatening bills from advancing. "With us enthusiasts all working together, we have easily knocked down these affronts to our hobby," Brill adds. "Most have included vehicle modifications, however, we've recently dealt with upping the tax rate for classic cars and our specialty registrations. Due to my 'training' and experience, I have been able to lead my fellow JCSNE members in writing effective letters to influence our legislators in leaning our way."

It seems that your automotive experiences have come full-circle, David. We're glad you continue to leverage your knowledge for our side! 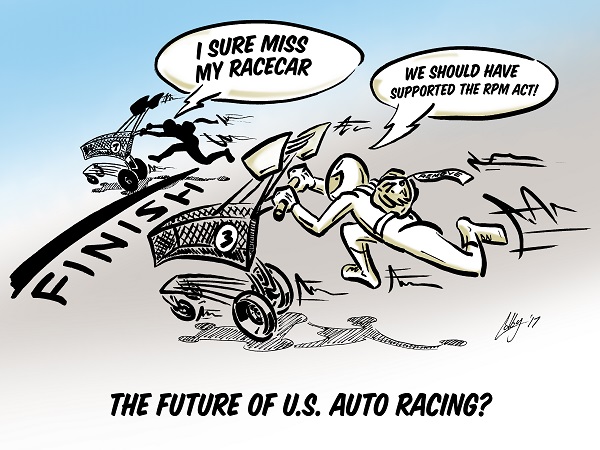 Stay Up-to-Date on the RPM Act: Get the latest information on the motorsports bill at www.sema.org/epa-news.