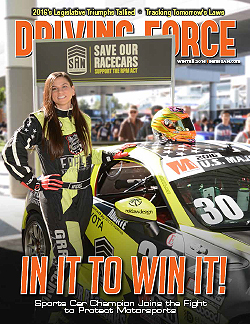 Bill to Protect Motorsports Reintroduced in the U.S. House of Representatives

The SEMA Action Network (SAN) praised U.S. Representative Patrick McHenry and his colleagues for reintroducing H.R. 350, the Recognizing the Protection of Motorsports Act of 2017 (RPM Act): http://youtu.be/YbT-uXVQrVU The bipartisan bill, which was submitted for reintroduction on the first day of the new Congress, protects Americans’ right to modify street vehicles into dedicated racecars.

Laws and regulations continuously impact the way automotive enthusiasts enjoy vehicles of all kinds. The SEMA Action Network’s (SAN) goal is to stay on top of all relevant state and federal legislation and regulations to help promote advocacy efforts across the nation so that automobile hobbyists may continue pursuing their passion. The following details the SAN’s state and federal successes in 2016.

Collector Car Appreciation Day (CCAD) is revered by Wisconsin natives Stan Johnson (second from right) and Dan Riedel (right). The pair made it their mission to get the state to officially recognize the celebration of our nation’s automotive heritage. As a result of their efforts, an Assembly Joint Resolution to annually designate the second Friday in July as “Collector Vehicle Appreciation Day” in the state was approved by the legislature in early 2016. Here they are joined by Representative Ken Skowronski, an original sponsor of the legislation, and Assembly Speaker Robin Voss at the state capital when the resolution was passed.

.auto-style1 { font-family: Arial, Helvetica, sans-serif; } Showcasing the automobile’s cultural and economic importance to our nation’s lawmakers is always a worthwhile endeavor. Loyal SEMA Action Network (SAN) supporter Stan Johnson took his inspiration for such an undertaking from the SAN-supported Collector Car Appreciation Day (CCAD). He recently teamed up with friend and fellow car show producer Dan Riedel to bring official state-level recognition of the national event each year. After passing early last year, Wisconsin’s Assembly Joint Resolution 79 now annually designates the second Friday in July as “Collector Vehicle Appreciation Day” in the state. The broader term “vehicle” was applied in order to include all types since Riedel is into vintage motorcycles as well.

No stranger to the hobby’s inner workings, Stan’s experience guided the resolution’s successful adoption. His background as a builder and racer of machines used in land speed, drag and road course competition spans decades. “If we can get annual recognition done in Wisconsin, you can do it in your state too,” Johnsondeclares. When asked how the team accomplished its goal, he offered a few tips. “First, study the “How to Plan Your CCAD Event” resource on the CCAD homepage,” he began. “Then, begin talking with local state-level legislators and their staff. The SAN website includes a link to locate your elected officials at all levels of government. Provide details on how the community enjoys car shows, races, motorcycle races and other events. Finally, request introduction of an official proposal into the legislature.”

This summer, stop by to meet Stan and Dan in Brookfield at Starry Nights’ Classic Vehicle Night Cruisin’ At The Wilson Center. This family-friendly event is held yearly on the Wilson Center’s park and hosted free of charge. A record crowd of nearly 4,000 attended last year’s event, which included a variety of collector vehicles,  restaurant-quality food and beverages as well as a free concert.

Stan and Dan, many thanks for your efforts to set such a positive example for our hobby with lawmakers in America's Dairyland!