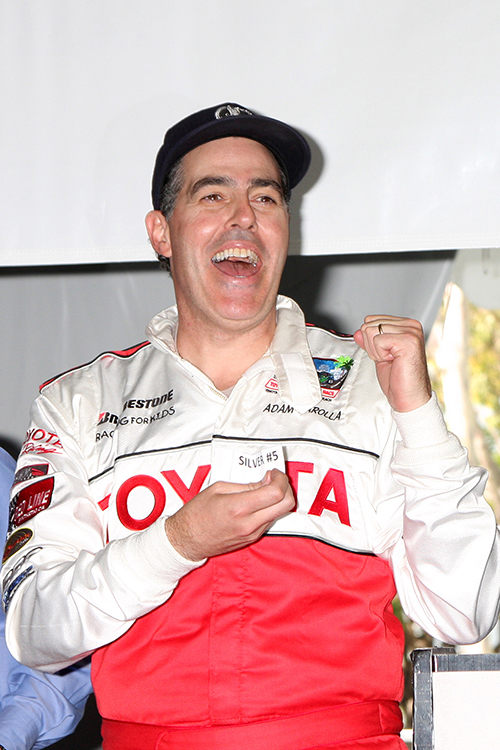 Wouldn’t you be smiling too if you had just punished a Toyota in the Celebrity Race at the Long Beach Grand Prix?
It’s good to be comedian and car aficionado Adam Carolla.

It’s no secret that Adam Carolla is forging his way into automotive royalty. Many are familiar with his name after he helped steer online-based media into a wild success. However, gearheads are becoming aware of the entertainer’s leveraging of showbiz to fuel his long-time four-wheeled passion—to refreshing effect. His personal shop houses a growing array of machines that are sights to behold: vintage racers and classic exotics being prepped for driving duties.

I’ve been a fan since Carolla first made his way into the entertainment industry. From the very beginning 25 years ago, his personality and wit distinctly struck me on the airwaves of morning FM radio. Here was a local guy doing comedic material about the finer points of power tools, nailing schedules, drywall and a host of non-carpentry topics aimed toward adults. My adolescent mind was instantly hooked. However, I was unaware at the time that he was so into cars.

The title of this piece, “When I Am King,” is derived from a recurring segment Carolla performed on TV. The premise of the tongue-in-cheek fantasy was simple: he’d yell humorous new decrees while seated on a throne wearing a crown. Laughter from the audience quickly prompted a mighty “SILENCE!” in return—furthering the comedic effect. Political satire need not be based on reality to be funny.

Imagine yourself being in a position of power. How would you write and/or rewrite the rules if you could directly shape policy? Set the ridiculous aside—this question actually forms the core of democracy. Keep the definition in mind: a system of government in which power is vested in the people, who rule either directly or through freely elected representatives. That’s right, future leaders are eligible to come from within the ranks of the common folk.

A not-so-obvious connection can be made between his bit and actual life. Carolla is a self-made talent who grasped for years to get in the spotlight and stay there. With a flourishing career, as well as a genuine interest in our hobby, he’s been able to make decisions most can only dream about. How many enthusiasts get themselves to a point where they can build kinships with automotive luminaries and legends, make documentaries about motorsports icons and buy ex-Paul Newman race cars to use in competition? Just by his mere participation, Carolla is influencing the collector car market—without necessarily setting out to do so.

Can members of the car and truck community rise up to become leaders? Yes, the notion of making a difference at home holds widespread appeal and is obtainable. Similar to Carolla, many elected officials have achieved their position by creating unique pathways all their own. Their “keys to the kingdom” were earned—not granted. For those familiar with the SEMA-supported automotive caucuses, legislators at the federal and state levels with an automotive appreciation are not tough to locate. In fact, the first steps are often within reach at the local level first. Case in point is West Virginia Senator Mark Maynard, who is also featured in this newsletter.

Food for thought: might a role in public office be for you someday? Here are accounts of what attracted a few friends of the hobby to service in their state legislature:

State Representative Stan Blake (Wyoming): I originally started in local politics running for a hospital board in Green River, Wyoming. That was unsuccessful. I then ran for the position of legislative representative for my union. After winning that election, I became aware that House District 39 was going to be vacated by the current office holder. I consulted with my wife and we agreed that I should throw my hat into the ring and run. The main attraction to run was that I wanted to try and make a difference in the lives of my constituents and to become a voice for the working people in my area.

State Representative Steven S. Howitt (Massachusetts): I have always been involved in public service. My father instilled in me the desire to not watch from the sidelines, but be involved in one’s community as he was. In 2004, then-Governor Mitt Romney was looking for candidates to run for representative positions. I gave it a try and lost. With perseverance and support from my wife and family, I continued my quest. After two more tries, I was successful.

Former State Representative Josh Byrnes (Iowa): I was not political prior to running for office. In 2009, we had a really bad budget situation where we had an administration spending more money than the state took in. Our state was suffering so I made the decision to act and get involved. I placed my name on the ballot and won! It was a great experience.

“Long before I had the space or the wherewithal to collect the real thing, I enjoyed feeding my automotive fantasies through the pages of the Langworth book Chrysler and Imperial: The Postwar Years,” recalls Roger Irland. “While I enjoyed browsing cover to cover, I was always captivated by the factory photos of the 1960 Chryslers. I mean, who wouldn't love boomerang taillights on a fin that soars off toward the horizon?” He’s since taken his passion for vintage vehicles to the ranks of the Antique Automobile Club of America (AACA). In fact, Roger has held several key committee assignments as an AACA National Director. As the outgoing vice president of legislation, he co-hosted a seminar entitled "Keeping Tabs on Hobby-Related Legislation" in February.

Roger admits that while he’d most love to find a Chrysler New Yorker convertible, he’s also a fan of station wagons. In fact, station wagons are the most numerous of all body styles in his current fleet. “What a wagon the Town and Country is!” he says. “The New Yorker was the most expensive wagon on the market for 1960. It’s also the first year for unit body construction as well as the hardtop wagon body style at Chrysler. It's rare as well—only 623 of the three-seat wagons were built. Powered by a 350 horsepower 413 cid engine backed by the push-button operated Torqueflite, it has plenty of smooth get up and go.” According to the car’s sales brochure, “Count on a cargo of pleasure in these New Yorker wagons…The car of your life for the time of your life!”

Roger intended to find out if Chrysler’s marketing pitch was true. Located in Moberly, Missouri, his friend found this car in a Kansas City paper while there on business. “I followed up on the ad and decided to buy it after looking over the pictures the owner sent. I asked to take it for a drive after seeing that it looked as good as it did in the pictures. I drove the car home to Phoenix, Arizona—the first stop was my favorite muffler shop to get the exhaust restored to a proper, refined note. The long wheelbase and Torsion-Aire suspension make for a very comfortable and sure-footed ride on a cross country trip. The paperwork I got with the car indicated the original owner was a church in Oregon.”

Many thanks for all your dedication to our hobby, Roger! May you continue having “the time of your life” with your beautiful Mopar.
EDITION 149